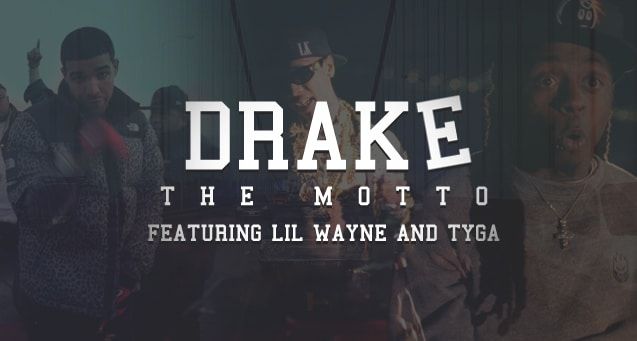 The Motto by Drake featuring Lil Wayne, is a fun upbeat rap song with pop and trap elements. The song promotes the idea of living life to the fullest because “you only live once”. The song was released in 2012, when the phrase YOLO had taken over the internet by storm. Drake was smart to play up this trend, by centering his lyrics around the word. However, the song mainly promotes Drake and Wayne’s “rap” lifestyles which are full of riches, cars, and expensive luxuries. The average person does not have access to these things or this way of living so the phrase you only live once, in this sense, does not apply to most people. The lyrics do perpetuate the idea that having lots of money means you made it (which is true in a sense). I think Drake chose to market this song to young people (as the phrase was used primarily by kids and teenagers), and his lyrics plant the idea of wanting to live the rap lifestyle in these young minds. Drake raps that people pretend they know him (because of his money), that he’s sitting on 25 mil (meaning that this large amount of money is minuscule in the grand scheme of all his riches), and that because he is rich, girls love him.

This is a popular theme in many hip hop songs, the artist celebrates their wealth and success by rapping about it. This has caused academics and critics to criticize hip hop music for promoting consumerism and “making” listeners of hip hop crave a similar lifestyle to that of the artist. I think that this theme within the genre is both positive and negative. It is great that hip hop has been able to make artists successful, especially because hip hop was originally not taken seriously and wasn’t even recorded in studios. Many rappers come from the same ghettos hip hop was created in, and it is an amazing feat that these people are able to rely on their talent and become millionaires.

Sonically, the instrumental of the song is great. It’s complex but simple at the same time. The 808 kick drum is on the low-end frequency, which makes it sound heavy and punchy. It helps fill up the bassline. This type of kick drum is common in trap music and here it seems to be layered with a bass like synth. It is most likely side chained (a production technique where one sound triggers another), because the bass is loud but when the kick is playing its lower in volume, which allows the kick to cut through the mix. The layering of bass and kick drum has been introduced in hip hop music through Trap music. Trap samples originate from the TR-808 Drum machine. The genre also commonly uses loud and heavy aggressive synths sounds that represent the background of the south (where trap music originated). Both the kick drum and bass are positioned in the center of the mix. A loud snappy, rhythmic snare drum can be heard in the mix. There is a clap sound layered with this drum, which gives it a sharper sound. The song has two types of claps mixed in with the drum sounds. The main clap is on every other beat of the song. It’s sharp and loud clap that most likely has been reverbed to sound that way, and is panned to mid left of the mix. The second clap is alternating, it sounds automated with a panning effect that moves the sound from left to right in the mix. The second clap has a sort of dirty sounding effect,which keeps true to the style of Trap music. The clap also has reverb and delay used on it. The clap is low( in volume) which helps ensure that Drake and Lil Wayne’s lead vocals are positioned in the center with a medium volume level that keeps them well blended in the mix. The panning effect is used again in the backing vocals of the song which are panned to the left and the right in the stereo field.The background vocals have a cool effect on them where they sound as if they’re coming from a telephone. The high and low frequencies were probably cut out in order to achieve this. There backing vocals and bit of the lead vocals have a delayed effect on them, which makes the backings repeat with echoes bouncing around in the background of the mix.

Although the song was released nearly eight years ago,  The Motto is still a happy song that doesn’t stray far from pop tracks, therefore making it appeal to the young audience it was intended for. It’s a great throwback, as a twenty year old, it reminded me of middle school days of dances in the gym and going to the mall with my friends. The song represents a primetime in the internet age, in 2012 the word YOLO was everywhere mainstream: on tv shows, on tee shirts, and used a hashtag constantly. The Motto is definitely worth a relisten if you have the chance.